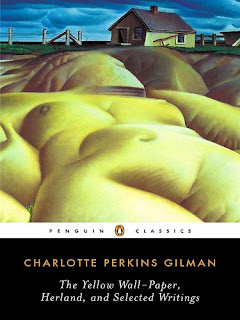 We were now well used to seeing women not as females but as people; people of all sorts, doing every kind of work.

This is a fascinating book, and there's surely a lot one could say about it as a landmark feminist text from a time when women's rights were widely curtailed.

Three male explorers set out to discover the truth about a legendary Land of Women, and in the process discover some rather unpleasant truths about their own land of men. As they set out, they only half-believe that such a world could exist:

"They would fight among themselves," Terry insisted. "Women always do. We mustn't look to find any sort of order and organization."
"You're dead wrong," Jeff told him. "It will be like a nunnery under an abbess - a peaceful, harmonious sisterhood."
I snorted derision at this idea. "Nuns, indeed! Your peaceful sisterhoods were all celibate, Jeff, and under vows of obedience. These are just women, and mothers, and where there's motherhood you don't find sisterhood - not much."
"No, sir - they'll scrap," agreed Terry. "Also we mustn't look for inventions and progress; it'll be awfully primitive."

When they do stumble upon this new world, they discover a female utopia: an ideal society, one entire ruled by women for women, with major advances in many sciences, and filled with women with a thirst for knowledge. It is also a society resistant to the 'accomplishments' of men. There are no men. This society's central tenet is one of the worship of motherhood, with birth occurring through parthenogenesis: "When a woman chose to be a mother, she allowed the child-longing to grow within her till it worked its natural miracle. When she did not so choose she put the whole thing out of her mind, and fed her heart with the other babies."

The narrator quickly has almost all of his preconceptions ("in our easy assumption of superiority") crushed about what makes an ideal society:

As I learned more and more to appreciate what these women had accomplished, the less proud I was of what we, with all our manhood, had done. You see, they had had no wars. They had had no kings, and no priests, and no aristocracies. They were sisters, and as they grew, they grew together - not by competition, but by united action.

The narrator is a sensible man ("I had not come to the country with any Turkish-harem intentions") – he wants to learn more and to attempt not to let on too much about how this society ("they had no horrible ideas") is making him feel about his own society. He is discussing how the women limit the number of their off-spring:

"But what I do not understand, naturally, is how you prevent it. I gathered that each woman had five. You have no tyrannical husbands to hold in check—and you surely do not destroy the unborn--"
The look of ghastly horror she gave me I shall never forget. She started from her chair, pale, her eyes blazing. "Destroy the unborn—!" she said in a hard whisper. "Do men do that in your country?"
"Men!" I began to answer, rather hotly, and then saw the gulf before me. None of us wanted these women to think that OUR women, of whom we boasted so proudly, were in any way inferior to them. I am ashamed to say that I equivocated. I told her of certain criminal types of women—perverts, or crazy, who had been known to commit infanticide.

His two companions act as foils to his desire to be fully and scientifically enlightened:

"What are you going to do with it when you do find it - if you do?" Jeff asked mildly.
Jeff was a tender soul. I think he thought that country - if there was one - was just blossoming with roses and babies and canaries and tidies, and all that sort of thing. And Terry, in his secret heart, had visions of a sort of sublimated summer resort - just Girls and Girls and Girls - and that he was going to be - well, Terry was popular among women even when there were other men around, and it's not to be wondered at that he had pleasant dreams of what might happen. I could see it in his eyes as he lay there, looking at the long blue rollers slipping by, and fingering that impressive mustache of his.

Of his two companions, Jeff is highly idealistic about women, with "gentle romantic old-fashioned notions of women as clinging vines"; this is, of course, another face of the masculine "assumption of superiority", but with Jeff the result is a sort of un-manning: "so deeply convinced of the almost supernatural advantages of this country and people, that he took his medicine like a—I cannot say "like a man," but more as if he wasn't one."

Terry, however, is a catastrophe waiting to happen. The language used of him by his companions hints at who is really primitive: the virgins who have evolved into a self-sufficient society, or the he-man who cannot believe any woman would not want him: "I always liked Terry. He was a man's man, very much so, generous and brave and clever; but I don't think any of us in college days was quite pleased to have him with our sisters."

Terry is incapable of understanding that there is no place for him in this society; even worse, from his perspective, these women are not 'feminine':

As to Terry's criticism, it was true. These women, whose essential distinction of motherhood was the dominant note of their whole culture, were strikingly deficient in what we call "femininity." This led me very promptly to the conviction that those "feminine charms" we are so fond of are not feminine at all, but mere reflected masculinity - developed to please us because they had to please us, and in no way essential to the real fulfillment of their great process.

And these women do not play by the rules of male society:

Terry put in practice his pet conviction that a woman loves to be mastered, and by sheer brute force, in all the pride and passion of his intense masculinity, he tried to master this woman. It did not work.

"It did not work." That is such a defining moment in the clash of the two societies, but I'm not going to spill any more beans about this absolutely fascinating early feminist text.

"Suppose there is a country of women only," Jeff had put it, over and over. "What'll they be like?"
And we had been cocksure as to the inevitable limitations, the faults and vices, of a lot of women. We had expected them to be given over to what we called "feminine vanity" - "frills and furbelows," and we found they had evolved a costume more perfect than the Chinese dress, richly beautiful when so desired, always useful, of unfailing dignity and good taste. We had expected a dull submissive monotony, and found a daring social inventiveness far beyond our own, and a mechanical and scientific development fully equal to ours. We had expected pettiness, and found a social consciousness besides which our nations looked like quarreling children - feebleminded ones at that. We had expected jealousy, and found a broad sisterly affection, a fair-minded intelligence, to which we could produce no parallel. We had expected hysteria, and found a standard of health and vigor, a calmness of temper, to which the habit of profanity, for instance, was impossible to explain - we tried it.

There is also a fair bit of creepy eugenics going on in the background which might give you a hint about a factor not noted in the narrator's praise: exactly how ruthless will this society of women be?

The only other writing by Perkins Gilman with which I am familiar is the excellent and spooky The Yellow Wall-paper. What else should I read?
posted by skiourophile
Email ThisBlogThis!Share to TwitterShare to FacebookShare to Pinterest
{labels} 1910s, charlotte perkins gilman, feminism, reviews, sci-fi, speculative, utopian, women