I'll start with three books offering a bleak - but more or less amusing - look at the seedier side of the lives of academics, journalists, and, er, hit men. 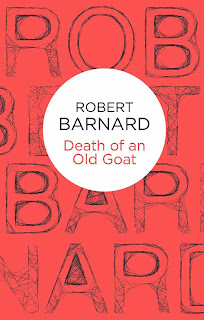 Professor Wickham was giving a tutorial. Or rather, he was being given one. Every year he put Hardy as late in the term as possible, hoping that by then his first-year students would have become reasonably chatty. This was because he never could be quite sure which Hardy novel it was he had read. Whichever it was, it had left on his mind a vague impression of doom and landscape, but nothing much else remained.

This is a very funny book about academia and country Australia. Barnard (who died this year) has a brilliant eye for the difficult life facing the second-rate Oxbridge academic exiled to an uncomfortable and ugly rural university ("Even the Queen had managed to avoid it on most of her visits to Australia, and there were few places in Australia of which that could be claimed.") of the type which sprang up in Australia from the 1950s onwards.

The 'old goat' is Professor Belville-Smith, an elderly Oxford don on a lecture tour of the provinces. He is a typically dry academic figure, full of snobbish distaste - and "senile malice" - for the colleagues he encounters ("tut-tut[ting] mentally at their vowel-sounds and their shirts"); and no one is particularly looking forward to listening to him either, given he "had been delivering that lecture since 1922" (!). But it would seem that the Old Goat knows something about one of the academics he encounters, and what he knows will lead to his brutal death...

The crime was fairly easy to figure out, but this book was elevated above the ordinary for me by Barnard's absolutely wicked sense of humour about the snobbishness of Australian academia ("This is what one gets for employing Adult Education lecturers who got their degrees at Leeds, thought Wickham grimly.") and the rural 'squattocracy' who provided the social background to all the university's activities ("'Just like the Wickhams to let the drink run out,' said Mrs McKay, a little tipsily, to Mrs Lullham. 'They’re only academics, after all, however much they try to hide it.'").

The actual crime, and the inexperienced macho racist cop assigned to solve it, were far less interesting than the setting and eccentric characters who-[might have]-dunnit. (I discovered this book thanks to clothes in books.) 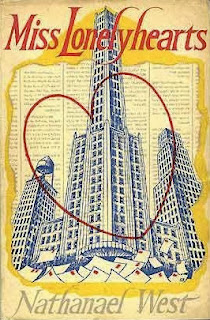 "Perhaps I can make you understand. Let's start from the beginning. A man is hired to give advice to the readers of a newspaper. The job is a circulation stunt and the whole staff considers it a joke. He welcomes the job, for it might lead to a gossip column, and anyway he's tired of being a leg man. He too considers the job a joke, but after several months at it, the joke begins to escape him. He sees that the majority of the letters are profoundly humble pleas for moral and spiritual advice, that they are inarticulate expressions of genuine suffering. He also discovers that his correspondents take him seriously. For the first time in his life, he is forced to examine the values by which he lives. This examination shows him that he is the victim of the joke and not its perpetrator."

Ouch. What a book. Like being mentally excoriated with a wire brush. Like the best sort of totally black satire. No glimmer of relief, no hint of light, and certainly no hint of escape in here. But also funny - well, sort of funny. Uncomfortable, ghastly funny...

What hope is there for the writer of the lonely hearts column ("the priests of twentieth-century America") in Depression America? Alcoholic, depressed, unloved and unlovable ("his heart remained a congealed lump of icy fat"), prone to fighting, poor at grasping cues, misunderstood, self-defeating ("he stumbled purposely, so that she would take his confusion for honest feeling"), numb from suffering ("more than thirty letters, all of them alike, stamped from the dough of suffering with a heart-shaped cookie knife"), doomed...

There's a lot going on here about the body too that I think I haven't properly grasped (when I wikipedia-ed it, apparently it is "Bergsonian" - I am in no way enlightened. Also existential. And Expressionist. Hmmm.). How can something so horribly bleak also be funny?

A classic: I'm glad I've finally read, but oh how miserable I felt after I finished.

He took the exit for the mall and found a parking place, taking careful note of where it was so he could find it again. Once, a couple of years ago, he had parked a rental car at a mall in suburban Detroit without paying attention to where he’d parked it or what it looked like. For all he knew it was still there.

A likeable hit man? A dog-loving stamp-collecting likeable hit man in need of a good psychiatrist? The 'voice' of Block's professional killer is just wonderful - sort of pensive, thoughtful, idealistic, melancholy, desperate to feel needed - a 'good' man despite his terrible day job. This book is a series of short stories ostensibly about John Keller's assignments, but really about what has made him the man he is today. If you like slowish little polished gems (someone sweetening a coffee "stirred it long enough to dissolve marble chips") about moral ambiguity, then these are for you.

He did that sometimes. Looked up his name in the phone books of strange cities, as if he might actually find himself there. Not another person with the same name, that happened often enough, his was not an uncommon name. But find himself, his actual self, living an altogether different life in some other city.

Lawrence Block died this year too (I see a theme here). This is the first of his books I've read, but I'm very keen to read more now. (I found this book thanks to belle, book and candle.)

Note [27/11/2013]: Brona remind me that I should link my Barnard post to her wonderful AusReading Month. Please do visit her blog for links to many, many interesting posts on Australian books and writers. 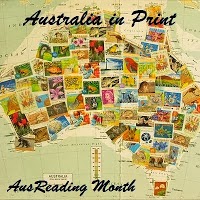