I might still be laughing over this book, if the blatant turning of a blind eye by major museums to the provenance of antiquities was not so serious.  It is a cross-over book; sort of popular non-fiction, I suppose. I read it because I read a few blogs about looting (for example, looting matters) and because I am hopeful that we are witnessing a cultural shift in practices. Hopefully.

The core of this book is the story of the attempt to unravel the back-story of the "Euphronios vase". In 1972 the Metropolitan Museum in New York purchased the "Euphronios krater" for a million dollars. This was, at that time, an unparalleled sum for an ancient Greek vase. 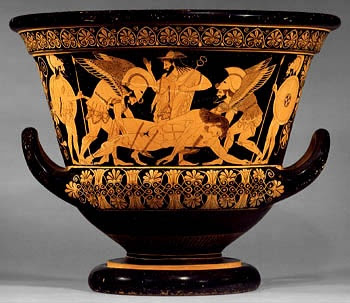 The Euphronios Krater, c. 515 BC:
Sleep and Death carry off the body of
the dead warrior Sarpedon (source)

From the moment this vase appeared in the Met., a cloud hovered: where did this astonishingly well-preserved (and restored) vase come from? How did it make its way to the Met.? How many pockets were lined along the way? Which country had lost an apparently unrecorded part of its cultural heritage? Was it a fake?

'New' really good quality, previously unknown Greek vases most certainly are either fake or have come from illegal excavations. Most of the best examples of ancient Greek vases do not come from Greece, but were export wares to the Greek vase-loving Etruscans in Italy (just north of Rome). These people were buried in underground tombs carved from the soft stone of the region and they were buried with rich grave offerings including many Greek pots. One question we ask when a vase like this turns us is, what else might have come from a tomb which had contained such a splendid item? 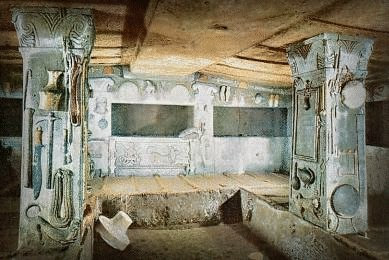 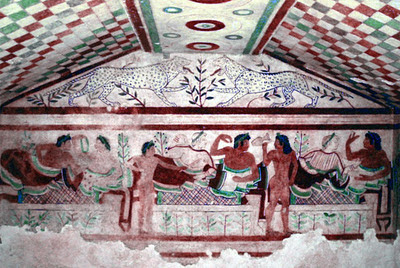 Etruscan wall-painting at Tarquinia ('Tomb of the Leopards'; source)

If an ancient object is taken from its original context in an illegal excavation, it is likely that all knowledge of this original context will be lost forever. We lose incredibly important information about the ancient culture when we lose the find spot of an object. We lose the ability to get as close to the ancient possessor of the object as we can get without actually being able to speak to them.

There are other couple of consequences: if the Met. is prepared to cough up a record price for an antiquity, the ripples are felt throughout the antiquities trade. A price like this encourages further illegal excavation; it encourages fakes; and it brings in a nice big fat commission to the middle men in their protected warehouses in Switzerland and to the auction houses. As the authors note, a new record for an antiquity with a dubious provenance quickly overcomes any moral impediment to the sale of further items.

From the Met.'s dodgy vase, the scene shifts to the purchasing practices of the John Paul Getty Museum in Malibu. The Italian government's painstaking work in building a case against the Getty curator Marian True is carefully laid out. True and the Getty were placed in an unfortunate position when a warehouse full of antiquities were discovered in the Geneva Free Port in 1995. The warehouse was associated with Giacomo Medici, an antiquities trader who had also been associated with the journey of the Met.'s vase to New York.

In the warehouse, authorities found a hugely detailed record of what had passed through Medici's hands, and this record included 1000s of polaroids showing the same antiquities in various states from fresh from the earth from their illegal excavation to partially restored to - unfortunately for certain museums - in their display cases.

The charges against True have been dropped by the Italian government but not before they had made their point that all future trade in antiquities illegally excavated from Italian soil would be pursued with a vengeance. A number of museums have since decided to return (sometimes as face-saving 'loans') items of dubious provenance, and it is likely that more will follow.

The authors build up a convincing picture of how the trade works and how it is possible to get around things like the 1970 UNESCO agreement (Convention on the Means of Prohibiting and Preventing the Illicit Import, Export and Transfer of Ownership of Cultural Property 1970) that should protect new discoveries.

I thought it most interesting to see how auction houses (not necessarily unwittingly) participate in the laundering of antiquities: although bidding on your own lot is forbidden, your own shell company might buy it and the dodgy antiquity will then effectively be laundered - passed back to you with a pile of legitimate paperwork to go with it and thus assist in its sale onwards. Another trick is to provide a fake provenance that ensures that the antiquity was apparently in an obscure private collection somewhere before 1970.

This is all fascinating (could have done with more images of the antiquities though) but this book is completely let down by its stereotyped players. I may be exaggerated a trifle, but almost all of the good guys (those trying to stop the trade or reclaim their country's lost patrimony) are short, jovial, witty, ebullient and dress with the style of Italians (even if they are Greek). They possess "a slightly academic temperament".

All the bad guys (tomb-robbers, middle-men, dealers) have lank hair but are tall, virile, dressed in leather, sweaty (no wonder) and/or closet homosexuals. They don't wear seatbelts. The bad girls use hair dye and fly to their philandering spouses' rescues with briefcases of cash.

The writing style is a form of modern sensationalism that one recognises from The Da Vinci Code. There are a lot of italics, just in case you don't get the point of things. The spelling is variable (Basle/Basel). There are some sentences which really ought to have been edited out, including my favourite: "Not everyone agrees with [X] in his judgments... but his... sheer resoluteness, has a certain magnificence."

I kept waiting for a self-flagellating albino to appear on the scene.

Bad writing and overcooked dramatics aside, this book is important because it offers a popular look at a really important issue - and one that is even more pertinent in the wake of the looting from, e.g., the Cairo Museum during the riots or the situation in Libya at the moment. What will happen to these stolen antiquities? You might think that the items are too well known to ever be passed on the antiquities market. However there are always people willing to acquire items of dubious provenance for their private collections. This book makes it clear, furthermore, that the curators of public collections are not immune to similar corner cutting when the collecting bug strikes.

You'll never look at a Greek vase in a museum in the same way again.

If you liked this… I want to read the Jason Felch & Ralph Frammolino's Chasing Aphrodite. The Hunt for Looted Antiquities at the World’s Richest Museum (2011), a further exposé of the Getty Museum.