{review} henrietta sees it through

The sequel to Henrietta's War: News from the Home Front 1939-1942 is almost as delightful as its predecessor.

Things on the home front are, of course, rather less lively by 1942, as the war drags on and more and more of the inhabitants of the little West Country village feel its effects. They are particularly irked that outsiders seem to think that they exist in a lost Eden of peacefulness.

This is a light-hearted book, which makes the small tragedies of war all the more poignant as everyone tries their hardest to maintain a stiff upper lip. As heartening morale-boosters, these well-crafted little letters to the mysterious 'My Dear Robert' are spot on. On the aftermath of enemy raid in the vicinity,

If it was Hitler's idea to strike terror into the hearts of sleepy West Country folk, then the whole thing was a failure, because it has simply made everybody very angry indeed. Lady B came round that evening, quite pink with annoyance. 'I'm in such a temper,' she said. Charles said he wished he could give her a little something, but there wasn't a drop in the cupboard. When we asked Lady B if she had been upset by the Incidents, she said no, she had got under the piano and taken some of Fay's Dog Bromide mixture, which had worked wonders. Lady B said Fay had been quite unmoved by each shattering explosion, and had remained in her basket with a bored expression on her face.

Henrietta (with her "two faithful hairpins, Castor and Pollux") is a delightful, scatty heroine, with her ability to get into all sorts of minor and very funny scrapes. Lady B. - Henrietta's companion in these scrapes and also her bulwark against the world's troubles - is a one of my absolute favourite characters. 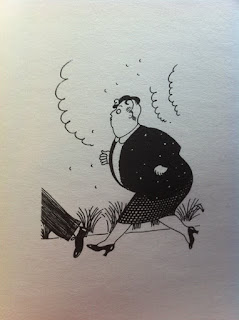 'What do you think about when you weed?' she said to me one day, as she sat and watched me busy among the onions. 'Well, all down that row I worried about the Linnet, and all down this one I'm worrying about Bill, and for the first three rows I worried about Libya, and for the next two our shipping losses, and - ' 'Stop!' said Lady B. 'I am an old woman,' she went on, 'and nobody expects me to do more than knit, but I'd never take a knitting needle in my hand again if I couldn't read at the same time and thus occupy my thoughts.' 'I wonder if one could read and weed?' I said. 'Of course you couldn't,' said Lady B. 'But it's time you snapped out of all this gloom, Henrietta. I think you'd better enter for the Bowling Tournament.' 'But I haven't played bowls since the war began.' 'That doesn't matter. I shall enter, too,' said Lady B recklessly. 'It will be unfortunate for our partners, but good for their self-control.'

It is not all fun ("Watching me garden is one of our gardener's favourite pastimes. He never seems to tire of it…") and games: there are losses, constant worries about the children's safety, and so many small but significant sacrifices to make (pulping one's books!). There are also a couple of interesting little bits and pieces: I didn't realize that doctors were exempt from having to take in evacuees. I would like to know more about a passing reference to women being compensated less than men for war injuries. And now I shall pronounce Noel Coward as "Nole Card"!

Dennys' wit is so sharp:

"At the Labour Exchange I was interviewed by a Young Person whose lips were painted where her lips were not."

On war on the English character: "Perfect strangers, they say, make each other cups of tea."

We nearly won the Dog Race (Owner to Run Backwards), too, but just at the finish Perry caught sight of the spaniel and twisted his lead round my legs. Some people fall elegantly and gracefully - I am not one. When I got back to my chair, Lady B said, 'Fancy those knickers lasting all this time. Didn't you get them before the war?'

Perry, incidentally, is the dog who "did catch a mouse once, but only after Charles had hit it with a telephone directory"!

If you liked this... a different kettle of fish, but Mollie Panter-Downes' war stories {REVIEW}.