Lately I seem to be spending my time reading (with considerable enjoyment and great sabotage to my own reading plans) other people’s reviews and not writing any of my own. What have I been reading?

Grant Allen An African Millionaire: Episodes in the Life of the Illustrious Colonel Clay (1897) 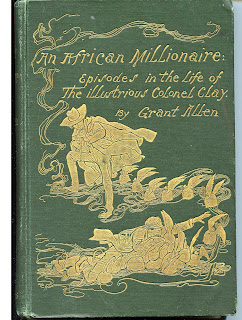 "He is a Colonel, because he occasionally gives himself a commission; he is called Colonel Clay, because he appears to possess an india-rubber face, and he can mould it like clay in the hands of the potter. Real name, unknown. Nationality, equally French and English. Address, usually Europe. Profession, former maker of wax figures to the Museé Grévin. Age, what he chooses. Employs his knowledge to mould his own nose and cheeks, with wax additions, to the character he desires to personate. Aquiline this time, you say. Hein!”

The African Millionaire in question, Sir Charles Vandrift, is a peer freshly minted for his services to industry (mostly exploitative mining projects in faraway corners of the British Empire). It is his bad-luck to have become the target of a wonderfully quick-witted con-man, and a master of disguise, one Colonel Clay. The ‘Colonel’ has decided to fleece the Sir Charles of as much of his fortune as he can – on the surface, not an easy task, given Sir Charles’ reputation as a cunning financier. But the Colonel plays audaciously on Sir Charles’ great weaknesses: a love of a good deal and the even greater love of an unscrupulous good deal.

The fact of it is, sir, your temperament and mine are exactly adapted one to the other. I understand you; and you do not understand me—which is often the basis of the firmest friendships. I can catch you just where you are trying to catch other people. Your very smartness assists me; for I admit you are smart. As a regular financier, I allow, I couldn't hold a candle to you. But in my humbler walk of life I know just how to utilise you. I lead you on, where you think you are going to gain some advantage over others; and by dexterously playing upon your love of a good bargain, your innate desire to best somebody else—I succeed in besting you. There, sir, you have the philosophy of our mutual relations."

From the glamorous hotels of the French Riviera, to the wilds of Scotland, to the plush clubs of New York, Sir Charles appears helpless to thwart his cunning opponent (and his extremely lovely sidekick: “However, a man of the world accepts what a lady tells him, no matter how improbable…”). Will Sir Charles ever understand that it is his own ethical shortcomings that have caused him to fall into Colonel Clay’s hands?

This is a very funny book, filled with a number of rather clever con jobs, set among a group of people, not one of whose morals can withstand too close a scrutiny. I thought it quite as good as the other Grant Allen book I have read, Miss Cayley’s Adventures, about the exploits of a strong-minded, educated young woman determined to make it in the world using her own wits (do read the reviews by desperate reader and tbr13). Both Allen books can be read for free thanks to Project Gutenberg.

And now for something completely different, but very relevant at the moment: 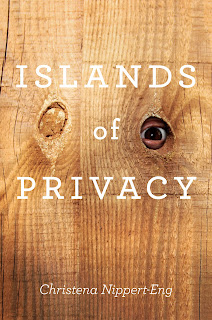 …for the people I interviewed, it can be quite difficult these days to claim any place, time, or activity as well and truly private. There is a general feeling now that the condition of privacy has become relegated to rather tiny islands of one's existence, few and far between, scattered across the vast ocean of accessibility that dominates so much of our lives.

This was a fascinating read: Nippert-Eng is interested in how we can maintain an acceptable level of personal privacy (“privacy is a condition of relative inaccessibility”) in a world gone mad for sharing and interrupting and demanding instant responses. How can one carve out a space, establish boundaries, and choose what we disclose and what we conceal?

One thinks immediately of the Internet in this context, but a number of Nippert-Eng’s case-studies are of much more intimate territory – a woman’s handbag; the sanctuary of one’s bathroom or yard or verandah/porch; the secrets of other people which we must keep (medical history, for instance); when we choose to take phone-calls (during sex? 14% in one survey said that they would do this!); email vs. more instant communications, and so on. “Interruptability is a key measure of how much privacy one has.”

What is the connection between privacy and status? Does a decrease in privacy through an increase in ‘cross-realm communication’ actually result in a more ‘integrated’ life? Given the recent brouhaha about the NSA leaks, it is interesting to consider Nipper-Eng’s comment that,

…privacy violations also remind us that privacy is seen as an entitlement for any respectable citizen in this country - an empowering symbol of one's good social status. When others deny us privacy, they also deny us status.

This is a nicely accessible book, with some theory applied lightly and unmystifingly, and written in a very (sometimes overly) colloquial style. It is mostly drawn from interviews in Chicago. I thought Nippert-Eng rather pushed her metaphor about islands (“As John Donne reminds us, no man (or woman) is an island”), beaches, sand, etc. a bit too far, but it did function as a readily understandable image for how she viewed privacy and its concerns. One criticism relates purely to the e-book: there are a lot of very small tables to back up Nippert-Eng’s research, and they don’t blow up very well electronically. That might be a problem is, unlike me, you were reading this book for serious reasons!

So, do you let others look in your hand-bag?
posted by skiourophile
Email ThisBlogThis!Share to TwitterShare to FacebookShare to Pinterest
{labels} 1890s, 2010s, america, christena nippert-eng, crime, grant allen, non-fiction, reviews, social networking