‘Reading, were you?’ Rupert picked up the book which lay on the little table by the fire. It turned out to be the poems of Tennyson, bound in green morocco. Could she really have been reading that? he wondered, looking around for the novel stuffed behind a cushion.
‘Yes, but I was just going to make some coffee,’ said Ianthe. ‘Would you like some?’
How convenient women were, Rupert thought, accepting her offer, the way they were always ‘just going’ to make coffee or tea or perhaps had just roasted a joint in the oven or made a cheese soufflé. (A Suitable Attachment)

I'm very late to the (tea?) party - though I have been playing along on twitter a little - but I have been so enjoying reading everyone's posts for Barbara Pym Reading Week, the brilliant idea of Thomas at My Porch and Amanda of Fig & Thistle. However, my new computer finally arrived yesterday (the whole saga is worthy of an entry to white whine, but I shan't bore you), so I'm back in blogging action now.

But, hey, plenty of time for reading without all those distractions provided by functioning technology, and I was really pleased that I managed to read five books by Barbara Pym this week. I loved them all, although I think that Excellent Women is my favourite (so far!).

So which ones did I read?

Excellent Women (1952) as I noted: wonderful, so funny and so sharp and quietly catty. And I was so happy to see Mildred Lathbury pop up (in name) in two other of my reads, so I found out what happened to her. This was my first Barbara Pym read, and I am now hooked. I may even like her more than Anita Brookner. Oh, perhaps not, but it is close...

Which is interesting, as my second read, Quartet in Autumn (1977) was a book with really Brooknerish resonances - about people who fail to "make contact" - although also reminiscent of another magnificent book about ageing, friendship and loneliness, Muriel Spark's Memento Mori {REVIEW}. It also captured the hideous ugliness of the 1970s really well.

Of the four only Letty used the library for her own pleasure and possible edification. She had always been an unashamed reader of novels, but if she hoped to find one which reflected her own sort of life she had come to realize that the position of an unmarried, unattached, ageing woman is of no interest whatever to the writer of modern fiction.

An Unsuitable Attachment (1963 - famously rejected by the publisher and not published until 1982) had a wonderful heroine in Ianthe, with her perfect little house and quiet careful life who is nevertheless prepared to take a chance on a happy ending rather than seek a safer alternative.

The man who had offered the seat had seen Ianthe as a tall fragile-looking woman in a pretty blue hat that matched her eyes. He might also have noticed that her dark hair was touched with grey and that although she was not exactly smart there was a kind of elegance about her. She saw herself perhaps as an Elizabeth Bowen heroine – for one did not openly identify oneself with Jane Austen’s heroines – and To The North was her favourite novel.

However, it was, obviously, the cat Faustina who really grabbed me in this one!

‘Yes – is that her coming now? I thought I saw somebody pass the window,’ said Sophia. Her tone was a little agitated for she had also just seen Faustina mount the refreshment table and pick her way delicately among the dishes of the cakes and savouries, sniffing the air, ready to pause and pounce when she came upon something that took her fancy.

After this I read Pym's first work, Some Tame Gazelle (1950), which was much more - like Excellent Women - obviously humorous in tone. I loved the sisters: Harriet, who likes to feed pale curates ("They were so immature and always made the same kind of conversation"), and the thoughtful Belinda who has loved the Archdeacon next door for thirty barren years.

She felt she could hardly agree that Agatha was elderly when she herself was a year older and thought of herself as only middle-aged. And yet, middle-aged or elderly, what was the difference really? Calm of mind, all passion spent … she had known that before she was thirty.

Belinda had decided to wear her blue chiffon. Henry had once said that he liked her in pale colours, and although that had been over thirty years ago it was possible that he still might.

The wicked one-liners in this book were quite wonderful. As a classicist, I am thinking of having this put on a t-shirt (perhaps in embroidery?): "I had a classical education and it isn’t a very good training for scintillating conversation."

‘Now, Ricardo, you mustn’t lose hope,’ said Belinda comfortably. ‘I know she is fond of you and even if she will not love you, always remember’ – her eyes lighted on the works of Alfred, Lord Tennyson – ‘that it is better to have loved and lost than never to have loved at all. I always think those lines are such a great comfort; so many of us have loved and lost.’ She frowned: nobody wanted to be one of many, and she did not like this picture of herself, only one of a great crowd of dreary women. Perhaps Tennyson was rather hackneyed after all.

Finally, I read Jane and Prudence (1953) about two university women whose lives have taken quite different paths, while their friendship has remained true. Can Jane find Prudence a suitable husband from the unmarried men (perhaps the handsome leonine philandering widower Fabian who has a large photo of himself on his wife's grave!) in the village where she tries but always fails to live up to her (literary) expectations of the appropriate activities for a vicar's wife?

‘Yes, of course,’ Jane agreed. ‘The church is going to look very nice, I think.’
‘Oh, Mother, you always say that,’ said Flora, Mrs Glaze having left them alone together. ‘And you never really notice.’
‘No, I notice the things one shouldn’t,’ said Jane.

I quite liked how a little bit of life at the time crept into this book - rationed food, for instance. I love reading about food in books, and Pym's books certainly offered me a lot of treats (apart from liver). I felt like a nice very dry sherry quite a bit as I read too; but not, I think, a madeira:

‘This is Madeira,’ said Mervyn. ‘It seems a suitable present for a respectable unmarried lady who might be visited by the clergy.’

The 'excellent women' ("It was not the excellent women who got married...") who carried the parish / village / suburb / street along in all these books thoroughly resonated with me (over-educated spinster, perhaps even "comfortably indifferent to dress?"!).

Prudence’s flat was in the kind of block where Jane imagined people might be found dead, though she had never said this to Prudence herself; it seemed rather a macabre fancy and not one to be confided to an unmarried woman living alone.

I also loved the literary allusions scattered so aptly through the texts. In addition, I was reminded that I enjoy books where nothing much seems to happen (so, my passion for Anita Brookner) and what does happen happens so quietly that it hardly creates a ripple. Of course, one doesn't want this in every book, but it is really very relaxing at times! It also amused me quite a lot that so many inhabitants of these books seemed to have jobs that no one quite knew what they were, including the employees, in a "vague cultural organisation" (J&P), or "something to do with records or filing, it was thought, nobody knew for certain" (Q in A). The ordinary, the everyday - these are the stars of these books.

I am so happy that I have the pleasure of eight more of Barbara Pym's books to enjoy in the future. Many thanks to Thomas and Amanda for creating Barbara Pym Reading Week! 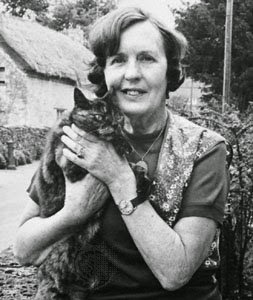