This is a post for International Anita Brookner Day, hosted by My Porch and Savidge Reads. 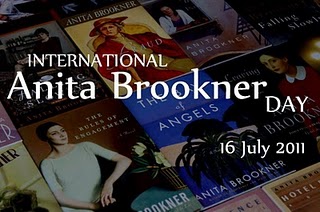 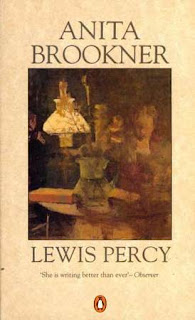 The appropriately muted cover of my copy.
Other covers include:

He was disgusted with himself, with his life. He was also confused. Why had it been his lot to become involved with such implacable women? He had looked to women for mercy, not for conflict. Since his earliest days he had thought of women as kindly creatures, benevolent, well-disposed. This had apparently been all wrong.

Paris. A student. An intense mother-child relationship. The London suburbs. An emotional half-life spent in libraries, taking the safest option. Ah, we say - an Anita Brookner novel. Indeed. But this one has a twist, for our quiet, timid, repressed protagonist is male. I am almost sure that I haven't encountered a Brookner with a male protagonist in the dozen or so I've read. Are there others?
It is 1959 and the twenty-two year old Lewis Percy is a graduate student working on his PhD in Paris. Lewis Percy is a self-centred only-child, raised from an early age solely by his widowed mother. He rooms in an apartment in the Avenue Kléber in Paris, in a household of women. When he's at home in suburban London, he lives with his mother. The subject of his dissertation - quietly integral to the irony and humour of Brookner's book - is heroism in the nineteenth century novel.
Lewis Percy is a novel about a man finding his feet as a man. He is offered stereotypes of masculinity: his gay best friend with an antique-dealer boyfriend (BTW, how many gay characters are there in Brookner?); his womanizing hypermasculine trend-chasing boss; the successful wealthy American academic with trophy wife (a nod - or a wink - to David Lodge here?); and, not least of all, the heroic male subjects of his research.

But Lewis Percy is also (and I suspect that I mean "really") a novel about women. Women dominate every aspect of Lewis Percy's existence and a full range of 'types' are presented to the reader: the saintly mother; the suffering virgin student flatmate from Paris; the hearty single professional girl flatmate whose answer to every problem is "Faites de la gymnastique ou faites-vous baiser" (a paler blue translation might be 'Work out or make out'); Miss Clarke at the library growing old and blowsy as she seeks a rascal to mother; the slatternly cleaning lady; the cousin's boorish wife (with her "necklace, of even smaller pearls… too modest to be anything but real" [Ouch!], "the type of wife who would collect her husband from the station, not out of her desire to see him, but so that he should not deviate on the way home to her"); the agoraphobic wife who discovers women's liberation but retains the virginal aloofness of the lady in the Unicorn Tapestry; the swinging singleton who destroys Lewis Percy's marriage ("a genuinely amoral woman, although he understood that they were not called that any more"); the daughter whom he wants to name Dorothea Brooke (a neat Brookner joke); his wife's Sphinx-like mother (a "red-lipped smouldering creature" brilliantly described as the "Messalina of the suburbs") who has given her best years - and respectability - to a man who won't reciprocate.
Brookner plays with great success with a number of her usual tropes in Lewis Percy. There were a couple of places where I was almost moved to wonder whether - heresy! - she was having a bit of a leg-pull with her own generic signifiers: the libraries; the lonely women; women's books; even the London through which her hero unwearily tramps. One specific example of this playfulness is the book's references to 'women's fiction'/'women's novels'. When Lewis Percy's book-loving mother dies, leaving him alone (and, more importantly, helpless without someone to deal with the mundane day-to-day domestic drudgeries), he revisits the library she loved and borrows the types of books she loved to read: the Elizabeth Bowens and Margaret Kennedys. The allusions to these books slip so easily from playful to denigratory:

He found himself drawn to the books his mother loved, as if reading them he could get in touch with her in a way of which she would have approved. In any event such reading seemed to him salutary. He began to think that his official reading, which involved him in grown-up theories about heroism, and nineteenth-century heroism at that, might have led him, not exactly astray, but perhaps a little too far from normal concerns.

Brookner, of course, is an heir of these women's novels, so it is somewhat amusing that her hero soon finds that "he had felt a certain distaste for all those women's novels with which he had comforted himself, and was at present immersed in The Eustace Diamonds."
Lewis Percy - the man - has two fundamental problems. First, he perceives gaining the sort of woman who would enable him to attain domestic bliss as a quest along the lines of his heroic "official reading". Perhaps as a consequence too of the "climate of femininity" in which he was raised he must, he thinks, swoop down and rescue a woman and make her his own. Only then will he be granted a reward: the losing his virginity and the gaining of a clean house.

Certainly his two earliest attractions are to women who fit a type that requires rescuing: Cynthia in Paris with her "kind of invalid sex-appeal", and the pale, repressed Tissy in his local library. When he carries his "quest" out - rescuing the agoraphobic librarian Tissy from her mother - we can already see disaster looming. He then compounds his problems by acting honourably (heroically: "faithfully but joylessly") when the enticing Emmy attempts to seduce him away from the satisfactory but colourless wife he compares to a fastidious automaton, a kind of unfulfilling Stepford Wife who leaves his dinner "on a plate in the oven, like a message in a tomb" and who regards the time spent on the book he is writing as a kind of infidelity to her own home-making.
Second, despite what he would perceive as his empathy towards and, indeed, liking for women - "a congenial and compassionate sex" - he does not in the least understand them:

It was all easier in books, he thought, especially in books written by women. They knew their feelings so well. He was more than ever unsure of his.

He was aware that he loved women in general too much to hurt them, and that his mother's stricture - 'I don't think we want to be unkind, do was, Lewis?' - would always inhibit him from the measure of decisiveness that might be conclusive. And he was also aware that to offer a woman sympathy was not always an heroic tactic. Yet what he felt for women was precisely a kind of yearning sympathy, rather than anything bolder or more straightforward.

But you can't learn everything about life from books, can you? Even if you are writing a book that champions the archetypal male hero? (Oh the lovely, lovely irony).

'You fantasize too much. You've probably read too much.'
'Yes, I have. I see that. I've had unrealistic ideas, antiquated notions. All wrong - I see that too. But were the ideas wrong? Or did I just misapply them?'

Life requires living: "Sometimes he wanted to leave the library and run for his life." What happens when you decide no longer to take the path of least resistance? As we have come to expect from a Brookner heroine hero, Lewis Percy must make a stand and be a man when the critical moment arrives. Can Lewis Percy change his life and escape the Brooknerish fate of each day being "another unmomentous day"?

(That phrase so brilliant captures the Brookner aesthetic, doesn't it? Elsewhere Lewis Percy notes, of an afternoon's tentative courtship, that "he did not see how much time had passed when so little had happened." Again, this is almost a summary of the Brookner corpus and reflects a quite self-reflexive bent in this book; indeed, Lewis Percy thrice refers to himself in terms of a character in a book).
Lewis Percy is a book about becoming a man without losing the ideals of a hero. I very much enjoyed it. I thought it offered a different way of looking at a typical Brookner character list. I found its in-jokes on its own genre quite delightful. It was also, as always, beautifully written. Brookner can sum up the entire 'class' characteristics of a room or a person with a mere handful of words. It was all quite charming in that monstrously sad Brookner way. Then again, I sometimes suspect that I would be affronted to find happiness in an Anita Brookner novel.

For what had his youth yielded, apart from a modest ambition and a mistaken confidence in women?

How do I rate it among other Anita Brookner novels? Right up there with my favourites, Hotel du Lac, A Start in Life, and Fraud.
My edition? (image at the top) I picked up my very secondhand copy at Sappho Books in Sydney when I was there on holiday in May. I was deliberately seeking an unfamiliar Brookner and can honestly say that my wildest expectations were exceeded.
posted by skiourophile
Email ThisBlogThis!Share to TwitterShare to FacebookShare to Pinterest
{labels} 1980s, anita brookner, challenges, reviews