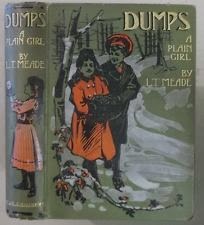 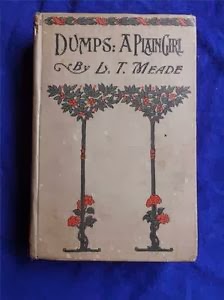 I am going to tell the story of my life as far as I can; but before I begin I must say that I do wonder why girls, as a rule, have a harder time of it than boys, and why they learn quite early in life to be patient and to give up their own will.

I'm not sure this is a review; more of an extended laugh at one of the best book titles I've encountered for ages. I mean, REALLY, "Dumps: A Plain Girl"? One almost doesn't need to read the book - surely it is quite plain (ho ho) what happens in this one.

...but he said the true name for me ought not to be Rachel, but Dumps, and how could any girl expect to rule over either boys or girls with such a name as Dumps? I suppose I was a little stodgy in my build, but father said I might grow out of that, for my mother was tall.

This is my second read of an L. T. Meade book: I started with A Sweet Girl Graduate, because I am interested in the history of women's colleges (having attended one), and I was hooked on Meade's blend of sickly sentimentality and sober evangelism for educating girls. I chose Dumps because of the title, though I was tossing up about Polly: A New Fashioned Girl. Happily there are plenty of Meade titles out there to keep me going forever (she wrote over 300 books).

So, poor little Dumps. Yes, Dumps is a plain girl. And she lives a rather plain life with her widowed father, who is a genius, but quite poor --

He was also somewhat of a saving turn of mind, and he told me once that he was putting by money in order to help the boys to go to one of the ’varsities by-and-by. He was determined that they should be scholars and gentlemen; and of course I thought this a very praiseworthy ambition of his, and offered to do without a new summer dress. He did not even thank me; he said that he thought I could do quite well with my present clothes for some time to come, and after that I felt my sacrifice had fallen somewhat flat.

-- and her brothers and a faithful but slovenly servant.

Dumps' life is a lonely one:

"And a girl's little brain is meant to keep a house comfortable."
"But, father, I haven't such a little brain; and I think I could do something else."
"Could what?" said father, opening his eyes with horror. "What in the world is more necessary for a girl who is one day to be a woman than to know how to keep a house comfortable?"
"Yes, yes," I said; "I suppose so." I was very easily stopped when father spoke in that high key.

Given Meade's support of feminist causes, I was hopeful that he would be struck by lightning at this point, but no such luck.

I really was a very stranded sort of girl. Hitherto I had had no outlets of any sort; I was just Dumps, a squat, rather plain girl, who knew little or nothing of the world—a neglected sort of girl, I have no doubt; but then I had no mother.

And then... one day a mysterious lady comes to visit, then invites Dumps to stay with her for a holiday, and easily wins the poor girl over with nice clothes and plenty of food and gentle kindnesses. But what lies behind this kindly lady's unexpected generosity? I'm not going to tell you any more, but Dumps has her world-view considerably widened and learns some important lessons about life and herself. Also, we are happy to learn, getting enough to eat really helps with her looks.

And I don't think I can end without mentioning Dumps' first friend, the blue-stocking Augusta:

"Do let us walk about," I said, “and let us be chums, if you don’t mind."
"Chums?" said Augusta, turning her dreamy, wonderful eyes upon my face.
"Yes," I said.
"But chums have tastes in common," was her next remark.
"Well, you are very fond of books, are you not?" I said.
"Fond of books!" cried Augusta. "Fond of books! I love them. But that is not the right word: I reverence them; I have a passion for them." She looked hurriedly round her. "I shall never marry," she continued in a low whisper, "but I shall surround myself with books - the books of the great departed; their words, their thoughts, shall fill my brain and my heart. I shall be satisfied; nothing else will satisfy me but books, books, books!"

So, not great literature by any means, but an entertaining, often sad, rather sentimental bit of fiction. Dumps was a bit whingy (though she certainly had grounds for that!), and I didn't think it was as satisfying as A Sweet Girl Graduate - where there is also a lot of rather melodramatic and silly action but the theme of the importance of educating girls is never lost.

Incidentally, Jane at fleur in her world has also recently reviewed another Meade title, A World of Girls. I have also been following a couple of blogs which constantly offer new lost wonders to explore, and I'd single out redeeming qualities and leaves and pages - there are so many great free e-treasures out there that I many never need to buy a book again.
posted by skiourophile
Email ThisBlogThis!Share to TwitterShare to FacebookShare to Pinterest
{labels} 1900s, children's, feminism, l. t. meade, reviews, silly titles, YA