This is another review for Kim at Reading Matters' Australian Literature Month. Kim is generously donating 50p to the Indigenous Literacy Foundation for each review she receives for the month that links to her blog.

She was perfectly aware that while Daddy wanted a mate he also wanted a daughter; and there was never any real danger of her losing that gentler attribute—there was too much in her of the little dead mother for that. Brownie, the ever watchful, had seen to it that she did not lack housewifely accomplishments, and Mr. Linton was wont to say proudly that Norah's scones were as light as her hand on the horse's mouth. 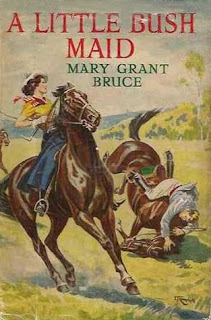 I have an ambivalent relationship with the Australian bush, the result of a teenagehood of family camping holidays with two keen parents and three much younger siblings. In fact, I shudder at writing 'camping' and 'holiday' in the same sentence. Our misguided (literally, if it was my job to read the map) forays away from civilisation exposed me to much of my home-state, South Australia. I am grateful for having seen so much (race-day riots at Coober Pedy), experienced so many things (feral cats in one's sleeping-bag), and been exposed to every extreme of temperature that this great land is capable of producing in spectacular abundance when one is forced to endure life under canvas.

The 'Bush' - that bit of Australia that is neither urban nor Outback - is quite astonishingly beautiful: 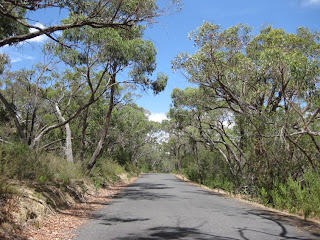 But it is also filled with a variety of hazards ranging from the merely inconvenient (no showers!) to the downright deadly: 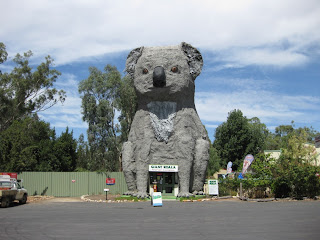 I am, I readily confess, no Norah Linton:

She loved the bush, and was never happier than when exploring its recesses. A born bushmaid, she had never any difficulty about finding her way in the scrub, or of retracing her steps. The faculty of bushmanship must be born in you; if you have it not naturally, training very rarely gives it.

It is no surprise, therefore, that it took me until over the age of forty to pick up these classics of Australian children's fiction, the first two books of the 'Billabong' series. Mary Grant Bruce's stories (fifteen in all) of Norah Linton, her kindly father, big brother Jim and his mates from school, and the inhabitants of Billabong Station are classics of their kind.

Norah's home was on a big station in the north of Victoria–so large that you could almost, in her own phrase, "ride all day and never see any one you didn't want to see"; which was a great advantage in Norah's eyes. Not that Billabong Station ever seemed to the little girl a place that you needed to praise in any way. It occupied so very modest a position as the loveliest part of the world!

The two books that I have read (so far!) have many positives: the heroine, Norah, is a strong, self-sufficient, smart young woman, who has been brought up to think for herself and be kind to others. There are few things that she is not allowed to do (as a woman in the early twentieth century), and many, many things that she can do regardless of her sex, and sometimes far better than the blokes. I thought she was an excellent role-model.

The bush is not depicted as a bucolic paradise, a sort of child's Eden: rather, the bush is a place where one has to work hard all the time to hold on to what is important; it holds unspeakable dangers for the naïve and unwary, and heartbreaking tragedy may lurk around every corner (are there corners in the bush?). Yet it is also a place of great community solidarity - a place where people help each other in times both good and bad. And, significantly, it is a place of great and healing beauty.

The negatives are mostly due to the series' grand old age and for that reason must be forgiven: the modern reader will cringe at the presentation of Aborigines ("That's a good boy," said Norah, approvingly, and black eighteen grinned from ear to ear with pleasure at the praise of twelve-year-old white) and non-white foreigners (although I note that Norah is generally open-minded about those she encounters) and, amusingly, almost anyone from a town:

And one of our men has gone down with the heat and can't field—fellow from the hotel with red hair, who made five—remember him, Wal.? He's out of training, like most hotel chaps, and as soft as possible, So we're playing a man short."

Curiously, she also has no time for the more generously fleshed: "she held the view that it was better to be dead than fat". In this, her outlook might appear excessively modern.

While Norah gains an enormous amount of outdoor experience (and can cook, sew and housekeep like an angel of the house), other aspects of her education are less satisfactory (until she is packed off to school):

Norah never could make out the people who pitied her for having no friends of her own age. How could she possibly be bothered with children, she reflected, when she had Daddy? As for Norah's education, that was of the kind best defined as a minus quantity. "I won't have her bothered with books too early," Mr. Linton had said when nurse hinted, on Norah's eight birthday, that it was time she began the rudiments of learning. "Time enough yet–we don't want to make a bookworm of her!"

In the first two books in the series, Norah deals with bushfires and typhoid, reunites a broken family, encounters heartbreaking loss and nearly loses her beloved father, tries to get to grips with city habits ("Further off came the cheerful voices of Jim and Wally on their way to the lagoon. Cecil preferred the bath in the house, saying that he considered it cleaner, which remark had incensed Norah at the time"), has a narrow brush with a fate worse than death, and prepares herself to be sent away from her beloved Billabong to a girls' school in Melbourne. I gather that, in the next books, the family travels to London, fights in the First World War (written contemporaneously), and is eventually reunited in our bush paradise.

I am keen to read on; however, while some of the series are in the public domain in other countries (at Project Gutenberg; or Girlebooks), the series is still in copyright in Australia under a family trust (info). I plan to collect myself some nicer old editions as I see them.

Thanks again to Kim for coordinating Australian Literature Month!