I'm very late to the party with this book. I LOVED IT. I really wish I'd written it. Not about Lazarus, but – precisely because Beard's format so well suits any semi-archetypal, quasi-historical figure – about Aesop. I'll say more about that.

This is a deliberately 'clever' book, and I liked it for how blatantly it advertised that fact. Literary allusion, lit. crit., biblical history, art history, basic epidemiology, and fictions of academic rigour are interwoven through the narrative. It is a startling book, with its metafictional perspective on its own dubious factuality.

With Lazarus, but also in many other fields, innovative discoveries can be made by trusting the historical human imagination. Admittedly, reconstructions have to be revised as new imaginative records become available, but biographers should stay faithful to the patterns that consistently emerge.

Lazarus is Dead examines the back-story of the death and resurrection of the biblical figure of Lazarus, stripping and embellishing, renovating and restructuring the slight gospel references into a fictional biography that simultaneously explores the place of the Lazarus miracle in the 'historical' Jesus narrative. I am by no means a New Testament scholar, and have no idea whether the fictional narrative's conclusion - that Lazarus is part of Jesus' 'practice' of the miraculous that leads to the final miracle of Jesus' own resurrection – has been offered up (albeit not in such a playful manner) in serious biblical exegesis. It may be a little on the blasphemous side for some readers.

Lack of firm knowledge about Lazarus is a tremendous boon to Beard's fictional reconstruction. As he writes, "We… have no direct access to Lazarus's version of the story". We know little apart from the gospel reference, and one thing that made me smile about this book was how Beard does a pretend academic work-over of the material at his disposal. So, no ancient evidence?

These are the sources other than the bible that can enlighten the biography of Lazarus.
...
The question about when Lazarus befriended Jesus is partially answered in a book by the Portuguese novelist and Nobel prize-winner José Saramago. In The Gospel According to Jesus Christ (1991), Saramago identifies a moral flaw in the popular story of the nativity...

This "evidence… extrapolated from salvaged memories and insights" is so playfully, easily, reflexively postmodern - it almost gives one a pain.

Thomas Hardy rhymes Lazarus with cadaverous, and the Swedish Nobel prize-winner Pär Lagerkvist, in Barabbas (1950), conveys an accurate impression of how Lazarus must have appeared to contemporary observers.

I can therefore say with confidence that today, on the morning after the first miracle performed by Jesus at the wedding in Cana, as Lazarus sets out for Jerusalem with Absalom and a couple of selected lambs, he is probably clean-shaven. In any biography, which is an attempt to bring someone back to life, the facts will generate patterns of evidence. There is a coherence to the visual memory of Lazarus: in the portrayals that survive, mostly paintings made between 1300 and the end of the eighteenth century, Lazarus is consistently free of facial hair.

The other neat trick played by the narrative involves bringing Lazarus back into the Jesus story. He is minimalized in the New Testament, but his foregrounding in the fictional recreation - particularly through an childhood bond with Jesus - brings out how much of a shadow-Jesus role he can play as the one who goes first, the test-case as it were: so, Beard's Jesus is "learning his lesson from Lazarus, dying in the open in front of witnesses, a verifiable public death."

Christians usually interpret Lazarus as a prefiguring of Jesus, who is Christ. This is the purpose of Lazarus's life, for those who believe in his literal existence, and his narrative function in the bible for those who don't. 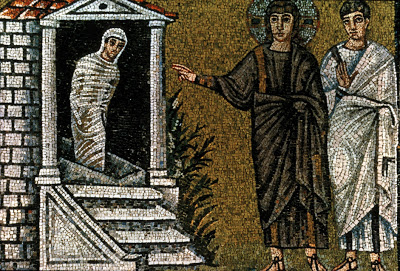 Lazarus-the-man is not terribly appealing. He smells dreadful, and "[h]is life is ordered, successful, unusual; he has no need of enlightenment". But he is terribly human and fallible, and it is his humanity that is so central to the book, and brought out as an effective foil to an inhuman (in a number of senses) Jesus.

Perhaps he'll thank Jesus warmly for all he's done. But, now he thinks about it, he might also suggest that Jesus could have come earlier, or stopped him from falling sick in the first place. It seems churlish to complain, but every first word he imagines saying is 'but'.

Apart from Lazarus, a number of other characters stand out. I would single out Cassius, the Roman sent to sort out what sort of danger is posed by Jesus' miracles. Cassius is not a believer in miracles; he thinks in terms of utility - and about how "compellingly staged" are the miracles: "He decides what Rome needs and then makes it happen." The Romans appreciate good stage-management. What use can he make of Lazarus? Will Lazarus survive death only to lose his life in a Roman prison? Or will Lazarus be the Jesus the Romans need?

'If we do kill you we'll do it properly,' Cassius adds, sensing that at last his words are having an effect. He pushes on. 'Death the Roman way means crucifixion, and no one comes back from that.'
'Please. I haven't broken any laws. Not that I know of.'
'I was there at the tomb. I saw what happened.'
'So what did you see? Did I come back from the dead?'
'In some ways, for your sake, I hope so. If you're lying then the penalty for false witness is death.'
'The penalty for everything is death.'
'That's justice for you...'

I loved this book. It will definitely be on my list of best reads of the year. It is so rich and imaginative and funny and playful (and brutal, stomach-turning and occasionally utterly horrifying). It is a remarkable fictional commentary on historical interpretation.

At some stage, and this is equally true for the historical Jesus, we must avoid a preoccupation with attempts to establish factual propositions. The evidence about Lazarus is fragmentary, and may have been misinterpreted in the two thousand years between then and now.

*  *  *
(And, my reference to Aesop? I haven't felt so stimulated by a book about the gospels since I read Frank Kermode's The Genesis of Secrecy: On the Interpretation of Narrative. I read this as a PhD student trying to unravel the multiple narratives surrounding Aesop, the fable-writer, who can be regarded as another more or less mythical figure (like Beard's hero), and who was also the topic of fictional biographies, the motivations for and sources of which are far from transparent.)