I'm off on a road trip today: Adelaide to, eventually, Dunkeld in Victoria, but via a very roundabout route so that I can tick off as many Big Things of Australia as I can: Big Olive, Big Ram, Big Orange (my favourite, but sadly closed), Giant Koala, etc. I'm also going to revisit a childhood favourite, the terrifying Bunyip of Murray Bridge... 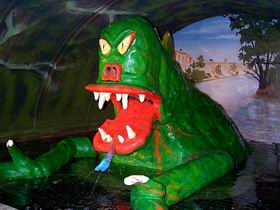 Source; more on the mythological bunyip.

By way of travel research I have been reading about meat pies, both historical and practical. Turn away now if you don't fancy a pie.

Robert Macklin, perhaps better known as a historical and a biographer of prime ministers, Jesus, and Australia at war (versatile guy!), has produced a little account of the meat pie's importance in his life and in Australian culture: "its glowing golden crust, its mouth-watering aroma of baking pastry and rich beef filling drifts across the inner landscape of Australian psyche."

This is a light read, but contains some meaty observations about the delicacy as well as a bit of pie p*rn:

The object of our desire is round, oval, square or even oblong. The pastry lid is probably a little flaky but not so much that the flakes will break away and stick around the mouth. The base is firm and beautifully smooth to the touch, lighter in colour than the top, the pastry shorter and more solid. The sides rise from a corner curve and the pie sits neatly in the hand snuggled alongside thumb and forefinger, the base resting on the long middle finger to hold it steady. Slowly the true pie lover raises it to the mouth, breathing in that glorious aroma to the trembling taste buds, selecting just the spot to take that first gorgeous bite that will open up the little treasure house of flavour and…oh, the wonder of it, that first taste of luscious minced beef and gravy lapping round the tongue and mixed with the buttery pastry that almost melts in the mouth. Oh heaven…

I feel able to answer any questions put to me about the pie now, and there is even an accompanying phone 'app' so that one can track down the nearest prize-winning Aussie pie on the go. (This book is only available as an ebook, I think) 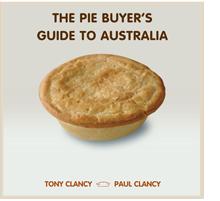 Practical research obviously has to be done on the ground. Thankfully these blokes have done the hard yards, and I am hoping that The Pie Buyer's Guide to Australia will direct me to the best pies on my travels. Sometimes one is also recommended another delicacy (I have a keen eye for vanilla slices [a custard filled mille-feuille]), but basically it is pies: "a good meat pie has the 'wolf' factor; a combination of characteristics that make it so irresistible that it is wolfed down immediately, straight from the paper bag on the footpath outside the bakery."

The authors travelled 1000s of kilometres and ate many, many, many pies in their search for the best. They even resisted the temptations of more gourmet-type pies in their hunt for meat pies and meat pies alone (I'm a bit of a fan of beef and mushroom, myself). Each pie is ranked from one to five 'pies' and photographed. I've already discovered a four-pie ranked pie just down the road from my house that I'd never have known about without this book.

Let us just say that this book is not going to be good for my waistline, but oh what fun I shall have!
posted by skiourophile
Email ThisBlogThis!Share to TwitterShare to FacebookShare to Pinterest
{labels} 2010s, australia, food, history, non-fiction, paul clancy, reviews, robert macklin, tony clancy, travel