This is almost my last post for a month. I'm off to Edinburgh (for a conference, the preparation for which has been interfering greatly with my reading), various bits of England, and Paris. I shan't be posting much until I get back, but I might do some 'monitoring' of my pâtisserie intake via twitter. I will have a post up for Paris in July sometime too.

However, I couldn't envisage leaving the country without having done my post for Beryl Bainbridge Reading Week (the brainchild of gaskella). 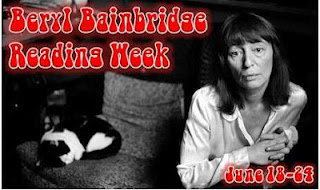 ‘That’s Italian, isn’t it, Rossi?’ asked Freda. She pointed at an inscription on the wall. ‘What’s it say?’
He studied it carefully. ‘Ah well,’ he said, ‘it is the Latin.’

‘Hail bright eyes,’ said Brenda unexpectedly. ‘Sleepy liberator … bent anguish.’
‘What’s that mean?’ asked Freda.
‘It is the sufferers from toothache,’ explained Vittorio; and Brenda felt it was an omen. Here, far from the farm and the absent Stanley, someone was caring for her teeth.

Well! I suspect that this book was either the perfect and lucky choice for a Beryl Bainbridge first-timer to select, or else all of her books are brilliant. I am really hoping the latter is the case, as I can't wait to read some more.

I'm not going to spoil the plot if I say that The Bottle Factory Outing deals with just that topic. Two English girls hold down low-wage jobs sticking labels on bottles in a smallish wine-bottling factory in London owned by an Italian. It is freezingly cold ("after midday, when the damp got to her bones, she climbed into a mail bag for warmth") and the conditions are appalling. The alcohol is only a perk or sorts:

Tearing herself free she stumbled from the washroom and ran back to her beer crate and her labels. She supposed it was the fumes from the wine that kept them all in a constant state of lust. It wasn’t as if she set out to be desirable.

All the other employees are Italian, and it is very much a closed shop. One of the English girls, Freda, is a big, exuberant, Rubenesque type, who "longed to be flung into the midst of chaos" - a natural bully:

She was five foot ten in height, twenty-six years old, and she weighed sixteen stone. All her life she had cherished the hope that one day she would become part of a community, a family. She wanted to be adored and protected, she wanted to be called ‘little one’.

The other, Brenda, is a browbeaten shy creature who exists in a constant state of embarrassment and fear - a natural victim ("flattening her vowels to accommodate him"):

‘Is she coming?’ asked Brenda.
‘God knows,’ said Freda, and she went upstairs to the bathroom, taking a pan of water with her to flush down the lavatory. The cistern had been broken for ten days and the landlady said she couldn’t find a plumber to mend it. Only Freda was inconvenienced. Brenda, who would have died rather than let the other occupants of the house know she used the toilet, usually went round the corner to the tube station.

Freda organizes a rare outing for the factory employees - a way of attempting a seduction of the boss's second-in-command. But things do not go to plan...

Some things that really struck me about this book:

Brenda had fashioned a bolster to put down the middle of the bed and a row of books to ensure that they lay less intimately at night. Freda complained that the books were uncomfortable – but then she had never been married. At night when they prepared for bed Freda removed all her clothes and lay like a great fretful baby, majestically dimpled and curved. Brenda wore her pyjamas and her underwear and a tweed coat – that was the difference between them. Brenda said it was on account of nearly being frozen to death in Ramsbottom, but it wasn’t really that.

I also cannot fathom how Bainbridge manages to pull of an incredibly surreal scene about two-thirds through the book during which, as reader, I too felt as though wrapped in the scene's fog of shock and incomprehension, as though removed at a few paces from the action that nevertheless continues apace, but where the everyday reality has tipped over into surreality. It was a real down-the-rabbit-hole moment.

A really excellent read and I am so grateful to gaskella for persuading me to read some Beryl Bainbridge. I have so enjoyed reading everyone else's thoughts on her books as well this week.

He was a man of sensibilities and everything was against her – his background, his nationality, the particular regard he had for women or a category of womanhood to which she did not belong. By the strength of her sloping shoulders, the broad curve of her throat, the dimpled vastness of her columnar thighs, she would manoeuvre him into her arms. I will be one of those women, she thought, painted naked on ceilings, lolling amidst rose-coloured clouds. She straightened and stared at a chair. She imagined how she might mesmerise him with her wide blue eyes. Wearing a see-through dressing-gown chosen from a Littlewoods catalogue, she would open the door to him... Against her will her mind dwelt on an image of Brenda in the cellar, cobwebs lacing her hair, and Rossi, hands trembling, tearing her newspaper to shreds. I will rip you to pieces, she thought; and her hand flew to her mouth as if she had spoken aloud. Beyond the romantic dreams, the little girl waiting to be cuddled, it was power of a kind she was after. It is not so much that I want him, she thought, but that I would like him to want me.

Which one should I read next?! 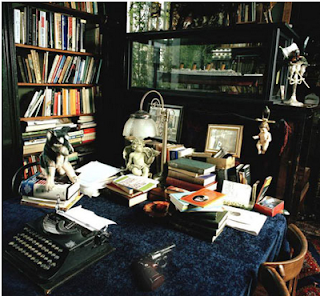 This is Dame Beryl Bainbridge's writing area,
photographed by Eamonn McCabe in 2007.
The gun is a toy (apparently!). Source (and a close-up here)
posted by skiourophile
Email ThisBlogThis!Share to TwitterShare to FacebookShare to Pinterest
{labels} 1970s, beryl bainbridge, challenges, latin, london, reviews