Agatha Christie The Mystery of the Blue Train (1928)

‘You have been to the Riviera before, Georges?’ said Poirot to his valet the following morning. George was an intensely English, rather wooden-faced individual.
‘Yes, sir. I was here two years ago when I was in the service of Lord Edward Frampton.’
‘And today,’ murmured his master, ‘you are here with Hercule Poirot. How one mounts in the world!’


This is one of those books which I first read as a teenager and which provided fuel to my dreams of travelling through Europe (um, without being murdered en route). However, when I re-read it recently (on my Kindle), I realised that I had never actually read the beginning because my ancient second-hand ex-library copy was missing the first few pages! I didn't matter to the plot, but, really, why didn't I throw it out years ago? 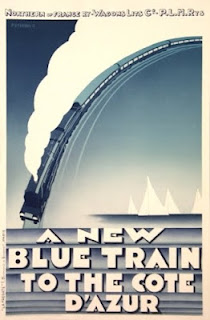 I've always wanted a travelling jewellery case, but that would presuppose that I had any jewels, let alone was silly enough to travel with them. This would do, I suppose: 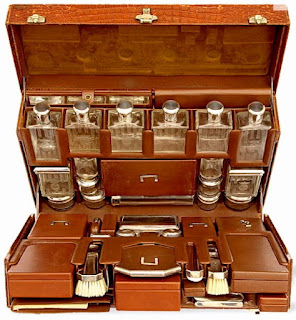 I thought that The Mystery of the Blue Train was a bit cliché-laden. Apparently Christie didn't like it. Even though I knew whodunnit from previous reads, I enjoyed revisiting this period piece. I recommend it for the settings and a pretty clever plot (I always give up thinking when anyone mentions train timetables as I know I'll never figure it out) and for featuring my favourite cliché of all, the dowdy companion who comes into money and is transformed by a good dressmaker. ;-)

...she presently went out into the streets of London with a comfortable assurance that she could spend money freely and make what plans she liked for the future.
Her first action was to visit the establishment of a famous dressmaker. A slim, elderly Frenchwoman, rather like a dreaming duchess, received her, and Katherine spoke with a certain naïveté. ‘I want, if I may, to put myself in your hands. I have been very poor all my life and know nothing about clothes, but now I have come into some money and want to look really well dressed.’
The Frenchwoman was charmed. She had an artist’s temperament, which had been soured earlier in the morning by a visit from an Argentine meat queen, who had insisted on having those models least suited to her flamboyant type of beauty. She scrutinized Katherine with keen, clever eyes. ‘Yes–yes, it will be a pleasure. Mademoiselle has a very good figure; for her the simple lines will be best. She is also très anglaise. Some people it would offend them if I said that, but Mademoiselle no. Une belle Anglaise, there is no style more delightful.’

Rating: 3/5.
If you liked this… not my favourite Christie. Try The Moving Finger or A Murder is Announced or They Came to Baghdad.