{review} i could never be lonely without a husband

Djuna Barnes I Could Never Be Lonely Without a Husband: Interviews by Djuna Barnes (Virago 1987) 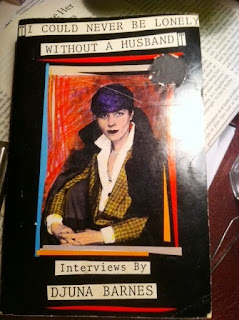 "Well, let's stop it."
"We can't, not yet; I have at least three pages more to fill."
"Have you been making notes?"
"I don't have to. My memory always makes a paragraph out of a note automatically." ['The Confessions of Helen Westley']

This is an extraordinary book.

I wanted to read more of Djuna Barnes' writing after I read Nightwood (1936) {REVIEW}, and I was very pleased to stumble across this Virago [the book, not Barnes!] in a second-hand bookshop. In theory, this volume collects some of Barnes' interviews with celebrities in a variety of predominantly New York magazines and newspapers from 1913 to 1931. In practice, this volume is very much about Barnes herself, by herself. I initially wondered if this impression was because I had heard of so few of these once famous people she interviewed - boxers, nightclub singers, evangelists, stage actors, Russian dancers, film producers, - and so I had only Barnes' voice to cling to in these little pieces. But, no, I think it is about Barnes in the end.

The editor of the volume suggests that Barnes almost certainly tidied up her interviewees' impressive bon-mots: "Sometimes I regret I was not a Roman. They had such a lot of time and baths." ['Diamond Jim Brady'] She also apparently didn't take many notes.

The interviews are witty (veering not infrequently into that dangerous Aristotelian region of 'wit' as 'educated insolence': thus someone has "a laugh like a submerged French pastry shop"), racy, incredibly broad in scope (ranging from the Great War to lingerie in a space of sentences) and very, very smart. She has a wonderful ear for both the absurd and the truly melancholy.

Well, unless you are a master at suicide, can do it nicely without messing the furniture up or spoiling your collar, I should say no, because at some time a chance to be great comes to us all. Even if it is at the last moment, one still has a chance to change his will or say something in Latin, Latin being the language of those about to cross the river. [Irvin Cobb in 'Irvin Cobb Boasts He Is Still Just a Country Boy']

She is capable of completely subverting the form of an interview (so 'Lou Tellegen on Morals and Things' is written in the form of a play!). I would not like to be on the receiving end of a Barnes' interview: "With hands outspread in hope of collecting profit, I came into the presence of Wilson Mizner, and therein he threw the tinsel of his wit" ['Wilson Mizner - of Forty-fourth Street'; ouch]. She is occasionally openly hostile ['The Tireless Rachel Crothers'], sometimes openly jealous of others' success ['Donald Ogden Stewart Confides the Secret of Worldly Success'], and she possesses a rapier sharp eye and a dogged determination to dig in deep. How many interviewers could get away with writing that their subject "droned on" [on 'Mother' Jones in 'I'm Plain Mary Jones of the U.S.A.']! Or this:

"Really, Djuna, you are sort of clever, aren't you?"
"I am only a little less conceited than you yourself, Helen." ['The Confessions of Helen Westley'] 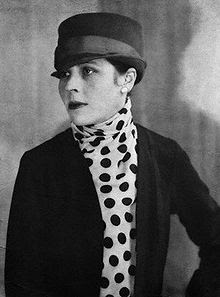 It often seems as though it is Barnes' own persona being crafted through these interviews as much as her subjects'. Her pronunciations tend towards the obscurely oracular (which can be irritating): "Her silences are organic bickering; when she does not speak she is profoundly articulate." [on 'Mother' Jones, again].

Someone has told me that I have a peculiar habit of noticing mouths. I have, and when I see one that does not merge into the rest of the face, I want the world to know about it, a mouth that is a personality upon a person. [in 'Alfred Stieglitz on Life and Pictures: One Must Bleed His Own Blood' {incidentally, there is a most interesting article on Stieglitz and Georgia O'Keeffe in the NYRB here}

As contemporary documents of an era, they contain interesting material: for instance, there is the stage actor who reflects on the new world of cinema and offers thoughts on the new art as a means of conferring immortality ['John Bunny']; or the black actors of the controversial The Green Pastures Broadway hit. Many of Barnes' subjects were exiles from a Europe at war or Russia in revolution - trying to establish themselves in America away from their loved ones. Many have seen or experiences extremes of brutality. Barnes is undoubtedly attracted to survivors. There is a lot of abrasive rubbing of the old vs. the new as these exiled cosmopolitans encounter the [from their perspective] limited cultural fora of the New World. There are interviews with a couple of super-stars (from our perspective) - James Joyce (the writer of greatest importance to Barnes' style) and Coco Chanel. The book ends with a lovely Coco-ism: "Personally, nothing amuses me after twelve o'clock at night!" ['Nothing Amuses Coco Chanel After Midnight', 1931].

Rating: a collection of interviews more interesting because of the interviewer than the subjects! Most of the pieces also have a very free drawing by Barnes of her subject. I wish the editor had included full publication details. 7/10 (too many boxers).

If you liked this: Nightwood?! Maybe some Fitzgerald jazz age short stories?