According to the St. George Register, on a clear night last June, at some time between eleven and half-past, my mom -- who isn't anything like this -- tiptoed down to the basement of the house I grew up in with a Big Boy .44 Magnum in her hands… What happened next? Nearly everyone in southwest Utah can tell you. She nailed an ace shot and blew his heart clean from his chest. The paper says he was in his computer chair, and from the way the blood spattered the drywall they're pretty sure the blast spun him three times around.
At the time of his death my dad was online playing Texas hold em and chatting with three people, including someone named DesertMissy. He spent the final seconds of his life in this exchange:

This is a big book. 600 pages. It made my thumbs hurt. I nearly bought another copy for my Kindle but parsimony gave me a FFS!-kick in the head, so I didn't. I preferred this cover too. 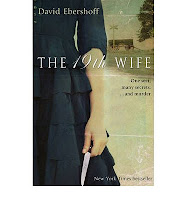 A number of elements made this a good read. The first of these is the narrative itself, which blends a contemporary murder investigation in a breakaway polygamous Mormon sect in Utah with an historicizing narrative/mystery of the life of the so-called 19th wife of Brigham Young, Ann Eliza Young, who led the crusade to end polygamy. The historical element far outweighs the contemporary events (in size as well as interest, in my opinion) and is also crucial to making sense of the modern murder.

Second, the characters of the novel are well drawn and the interconnections that we discover between them make for a fascinating and puzzling read. The hero is the son of the alleged murderer (and the victim). He's also gay, which guarantees doubly that the sect won't warm to him again. Driven out of the sect as a teenager (indeed, dumped by his mother on a roadside to fend for himself), Jordan has survived by his wits and returns only with great reluctance to the scene of the world which so damaged his childhood. But the polygamous sect is reluctant to give up any secrets and quite content to allow his mother to face execution for murder.

Third, there is the murder. When the victim manages to type the identity of his murderer just before the Big Boy Magnum takes him out, it's sort of like a classic locked room puzzle, isn't it?

Four, the setting: the historical travels of the early Latter Day Saints as they made their way to Utah and the contemporary world of the polygamous sect (the logistics of being a polygamist are way beyond me. Nineteen wives, 100 kids, etc. Imagine doing the laundry...) in the red hot Utah sun. Fascinating and horrifying in equal measure.

And, finally, at the very end, a little surprise which shakes to the core one's implicit faith in the narrative. That was a master-stroke which elevated this book above being just a bit of crime fiction with some historical overlay.

My only quibble with this book was its bloated, thumb-aching size. It was too long for what it was attempting, I think - neither pure crime nor pure historical fiction - and perhaps the history could have been pruned a little. But, all in all, a fascinating setting and a strong and interesting narrative.

If you liked this… I want to read his The Danish Girl, a fictional take on one of the first male to female gender reassignment surgery cases.