{review} no orchids for miss blandish

The blonde leaning over the counter smiled at him. She had big white teeth that reminded Bailey of piano keys. She was too fat to interest him. He didn't return her smile.
“Hello, mister,” she said brightly. “Phew! Isn't it hot? I didn't sleep a wink last night.”
“Scotch,” Bailey said curtly. He pushed his hat to the back of his head and mopped his face with a filthy handkerchief.
She put a bottle of whiskey and a glass on the counter.
“You should have beer,” she said, shaking her blonde curls at him. “Whiskey's no good to anyone in this heat.”
“Give your mouth a rest,” Bailey said.
He carried the bottle and the glass to a table in a corner and sat down.
The blonde grimaced, then she picked up a paperback and with an indifferent shrug, she began to read.
Bailey gave himself a long drink, then he leaned back in his chair. He was worried about money. If Riley couldn't dream up something fast, he thought, we'll have to bust a bank. He scowled uneasily. He didn't want to do that. There were too many Feds around for safety.

Apparently James Hadley Chase, a Brit., knocked out No Orchids for Miss Blandish in a couple of weeks without ever having visited the U.S. He based all his gangster knowledge on the cinema (source).

It was a sensation in its time. George Orwell, in his essay on the decline in moral sensibility in the crime novel between the gentlemanly Raffles (c. 1900) and the "cruelty and sexual perversion" of Miss Blandish (1939), thought reading the latter was akin to taking "a header into the cesspool".

Certainly Miss Blandish retains the power to shock in its story of the kidnapping of the wealthy and beautiful Miss Blandish by a small-time gang who are almost immediately bumped off by a larger and more brutal mob of gangsters. Is that the collective noun for gangsters? There is a lot of casual death-dealing: one scene that sticks in my mind was when the psychotic son of Ma Grissom (the female gang-leader) pretty much has an orgasm while knifing the opposition. The killing has a casualness coupled with a sadistic bent that makes this a brutal book to read.
The book maintains an impressive level of outright open brutality and horror, with torture, knifings, shootings, bombings, etc. The viciousness is racked up even more by the sexual sadism presented in the narrative. Miss Blandish's fate at the hands of the brutal Slim Grissom sticks in the mind for a very, very long time. The bad guys (and gals) even look bad:

Ma Grisson was big, grossly fat and lumpy. Flesh hung in two loose sacks either side of her chin. Her crinkly hair was dyed a hard, dull black. Her little eyes were glittering and as impersonal as glass. Her big floppy chest sparkled with cheap jewelry. She wore a dirty cream colored lace dress. Her huge arms, mottled with veins, bulged through the lace network like dough compressed in a sieve. Physically she was as powerful as a man. She was a hideous old woman, and every member of the gang, including Slim, was afraid of her.

A couple of things stood out for me about Miss Blandish. One was that it devoted the majority of the narrative to the gangsters' side of the story, rather than to that of the good guys. The reader is immersed in amorality from the opening lines and there seems little chance of any redemption as the narrative continues. Another interesting factor was 'Miss Blandish' herself: she is never described by any other moniker, which adds to the frightening depersonalisation of her experience at the hands of her captors (an experience in sexual objectification further exacerbated by drugs). 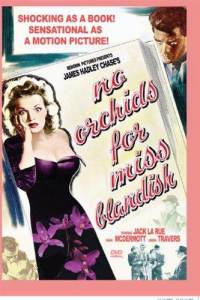 Despite its subject matter - and the treatment of women in this book is sickening, so you've been warned - this book was a real page-turner (or, rather, page-clicker). The writing - especially the idiom - was excellent, and the story gripped from start to climactic conclusion. I would definitely chase (ha ha) down some more Chase.

"Women! Women! Women!" Ma snarled, pounding on the desk. "Always the same! Barker... Karpis... Dillinger... they all went the same way... because of women! Everything I've planned could be shot... just because a goddamn chippy opens her goddamn mouth!"

Rating: 9/10.  I got my free e-copy from manybooks.net (not too many typos).
If you liked this... I was reminded a bit of Dorothy B. Hughes In a Lonely Place {REVIEW}. I really want to read some James M. Cain now too (I loved the film Double Indemnity - the book has been reviewed at ready when you are, c.b.).