I recently pulled Agatha Christie's Nemesis (1971) from the shelf. I've read it a number of times before  (it is a nice follow-on, but not specifically a sequel, to the brilliant A Caribbean Mystery) but I'd never noticed the detail of the dust wrapper on my edition, with its knitted question mark: a long knitted scarf piece as the hook of the question mark and a ball of wool as the point underneath. It is a really gorgeous hot pink and a most striking design: 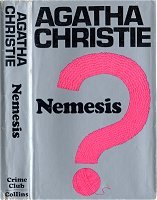 Image source
I note, incidentally, that this cover has been reissued in a first edition facsimile but doesn't seem to be as hot pink as the original; the knitted effect is more striking tho'. 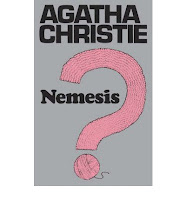 I couldn't resist another read of Nemesis and, as usual, was in awe of Agatha Christie's ability to tell a story. Her late 1960s-early 1970s books are not to everyone's taste. Christie attempted to embrace the violence and brutality of the era and it is not always with success: for instance, the views expressed in this book on rape are pretty eye-opening. This bit was more amusing:

Miss Marple looked with distaste at the jacket of the book, a naked girl with blood-stained markings...
'Really,' she said, 'I don't like these horrors nowadays.'
...
Miss Marple detached a second book. 'Whatever Happened to Baby Jane,' she read. 'Oh dear, it's a sad world one lives in.'

What I noticed this time - as well as the cover - was how the book gives us little hints at how Miss Marple became Miss Marple; it was almost biographic in places. I wonder if the Whatever Happened to Baby Jane reference was even a bit of a wink towards Miss Marple - Miss Jane Marple. There is also a fair bit of personal voice from the detective, "an elderly, rather scatty, quite ordinary person, physically not very strong, mentally not nearly as alert as she used to be."

'...And, of course, yes, I'm very ordinary. An ordinary rather scatty old lady. And that of course is very good camouflage. Dear me, I wonder if I'm thinking on the right lines. I do,  sometimes, know what people are like...'

A background picture develops of a Miss Marple who had led a life of sacrifice, caring for elderly parents:

"I am used to sick people. I have had a good deal to do with them in my time."

It's all rather sad, yet I rather like that Agatha Christie was prepared to let her detective heroes grow old. Anyway, it's a cracking read: Miss Marple, with her "flair for Evil" is given an assignment by a dead man. She has no details of the crime that may have been committed but is sent off on a coach tour of English gardens with a busload of potential suspects. She slowly becomes aware that her travelling companions all hold different pieces of a puzzle that will enable her to set right a miscarriage of justice. For that is Miss Marple's real flair - for justice - and the attribute of Nemesis to a fluffy old lady with a fondness for fluffy pink knits is by no means inapt.