I was in the back room, perfectly euphoric, my eyes filling with tears, in the miraculous presence of Art.

There's not much I want to say about this book because (a) everyone in the entire world seems to have already read it, and (b) I can see why, as it is wonderful. The Elegance of the Hedgehog contains the interwoven stories of Renée (a widow who conceals her devastating intellect by camouflaging herself as a stereotypical concierge) and twelve year old Paloma who also lives with a big secret. Set in an upmarket French apartment building, the divisions based on class, wealth and (supposed) intellect begin to break down with the arrival of a new Japanese tenant. Will Renée get a second (or, some might suggest, first) chance at life? Will Paloma carry out her threat to commit suicide? Is phenomenology that crazy? Are Parisians Cartesian? Should I read War and Peace now?
This is a touching book, and a funny one. I loved Renee's 'cherry plum test' which she applies to determine the greatness of what she reads. I kept considering what I might substitute, given a distaste for plums.
This book offers, among many things, a lesson on loneliness and friendship:

If you have but one friend, make sure you choose her well.
The peace of mind one experiences on one's own, one's certainty of self in the serenity of solitude are nothing in comparison to the release and openness and fluency one shares with another, in close companionship . . .

I wondered a bit about the 'Beauty' theme. I realise the theme is important to the book but I'm not a fan of the cliché of the ugly woman transformed by a superficial makeover; in this case, as the ugliness is something that Renée carries about with her as part of her concierge 'costume', perhaps I can let it pass! Also, I've done a bit of philosophy, but sometimes I thought we were deliberately being kept in a contrived state of bafflement.
What was that annoying book...? - Sophie's World. Grrr. However, this is the second book about a potentially annoying precocious child that I've enjoyed this year (the other was the first Flavia de Luce mystery). I hope I'm not succumbing.
The Parisian setting kept striking familiar chords and I enjoyed the different takes on familiar places – 'Angelina', for example, where I've had many a glorious hot chocolate and Mont Blanc. 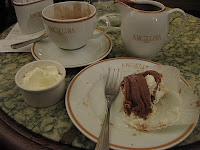 The imagery of cats, flowers, art, music and food was memorable. Are we meant to think of that other dame aux camelias when we think of Renée? I'm thinking of her sister's fate and also her class consciousness (a poor shorthand but close enough): "Don't fraternise with rich people if you don't want to die: since then this has become her survival technique".
This was a thoroughly good read if profoundly unbelievable. I cried, despite the trite ending.

To be poor, ugly and, moreover, intelligent condemns one, in our society, to a dark and disillusioned life, a condition one ought to accept at an early age.

Oh, and I am sure the afternoon tea treats from Ladurée were macarons, not macaroons. 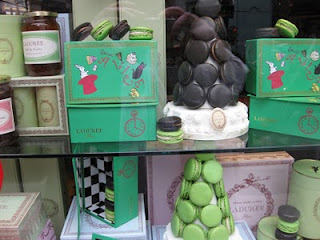 Should I see the film?
Rating: 8/10
If you liked this... (a) precocious kids: The Sweetness at the Bottom of the Pie (Alan Bradley); (b) intelligent French-ness: The Chalk Circle Man (Fred Vargas). What is it with all these novel-writing female French professors?
posted by skiourophile
Email ThisBlogThis!Share to TwitterShare to FacebookShare to Pinterest
{labels} 2000s, alan bradley, cinema, france, fred vargas, muriel barbery, reviews, translations