This is a post for Mary Stewart Week, the brainchild of Anbolyn at Gudrun's Tights.

I went back to the bookshelf. It would be nice to be able to record that I was the kind of person who would pick up the Dostoevsky or the Huxley or even The Golden Bough and curl up with it for a glorious evening’s read. But when eventually Mr Lethman came for me as he had promised, he found me a few chapters into The Tiger in the Smoke, and half-wishing I had chosen something less exciting for a night in the deserted wing of a ruined palace. 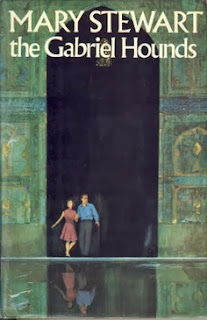 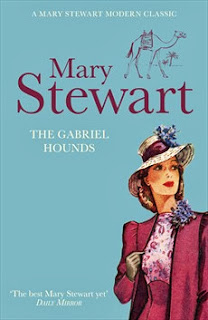 Let me confess: the first image matches the lovely vintage edition 1967 Hodder & Stoughton edition I bought for this week. Then I opened it to discover the print was agonisingly small. So I bought the kindle edition with the ridiculously anachronistic cover. The book is set in the late 1960s, for heaven's sake! That camel will eat your hat and nosegay.

Apart from being a teensy bit incestuous for my tastes, The Gabriel Hounds is very much a classic Mary Stewart romantic suspense book:

The years rolled back more swiftly even than the crimson silk as he said, with exactly the same intonation with which a small boy had daily greeted his even smaller worshipper: ‘Oh, hullo! It’s you!’ I wasn’t a small girl any more, I was twenty-two, and this was only my cousin Charles, whom of course I didn’t worship any more. For some reason it seemed important to make this clear.

Let's get this out of the way first. Cousins! Any cousins here? How about you get out more and meet other people? Dilute that gene pool! Go on... You're both young, rich, gorgeous and set loose in an exotic location in the Middle East - go fall for someone to whom you're not related. Especially if you're also the off-spring of parents who were twins (not with each other, but you get the picture). Ick and yuck and aren’t there laws about that?

Christy (Christabel) Mansel is a "stinking rich" girl of independent mind on a tour of the Middle East when she runs into her cousin Charles, whom she has not seen for several years. As a child she had worshipped him. The two make a plan to meet up in Beirut after her tour and visit their wildly eccentric and rarely seen great-aunt Harriet, who has adopted the manner and the lifestyle of the early nineteenth century lady traveller Lady Hester Stanhope. Great-Aunt Harriet is holed up in a ruinous palace outside Beirut and is living the life of an orientalised nabob. Charles was a favourite of the dog-loving old lady, who wishes him to have her pair of Ming dynasty china dogs – the eponymous Gabriel Hounds.

There is a bit of a travel mix-up and Christy - always strong-minded – decides to visit her aged relative alone. The palace is falling to pieces and a personable but vague young man is living there with the great-aunt. When Christy eventually gains admittance, she is wholly horrified by exactly how crazy her great-aunt appears:

Her skin had a sallow pallor and her lips were bloodless and sunken, but the black eyes and well-marked brows gave life to the fullish, oval face, and showed none of the fading signs of old age. She had daubed powder lavishly and carelessly, and some of it had spilled over the scarlet velvet. Above this curiously epicene face she had twined a towering turban of white, which, slipping a little to one side, exposed what for a shocked moment I took to be a bald skull; then I realised she must have shaved her head. This, if she habitually wore a thick turban, was only to be expected, but it was somehow the final touch of grotesqueness.

But beyond this theatrical horror show, Christy fears that something is badly wrong in the palace. What is going on in the old dungeons (I do love a dungeon in a book!)? What was in those really very aromatic cigarettes? Where are the missing Gabriel Hounds? And, as the nearby river rises and she is cut off from civilization, is it too late for rescue? Well, of course not - this is a Mary Stewart book, after all – but how will Christy extract herself from danger? And what has happened to handsome Cousin Charles?

This is an enjoyable read with typical Stewart touches of darkness and mild horror. Her language is a joy: "Eastern-looking sheep" are "spatchcocked with black"; the iron bedstead "came across the cracked marble with a dot-and-carry-one screech of broken castors"; when drugged, one's thoughts "dislimned". I have quoted a passage on the intriguing contents of a bookcase in the palace, and there are plenty of small touches that increase the suspense. Among these I would particularly note: the atmosphere of being trapped in a proper old-school harem seraglio with all its white-slaving implications for nice young English ladies; the heroine's name, Christabel, with its Gothicky poetic overtones (I didn't figure this out for myself – Stewart likes to quote from Coleridge's spooky poem); and, of course, the mysterious Gabriel Hounds themselves – named after the pack of Hounds of Hell "that run with death, and when someone's going to die you hear them howling over the house at night."

An additional sense of melancholy suffused this reader too, thinking about Christy's mostly idyllic Syria and Lebanon and the terrible devastation those countries have suffered since.

I have previously been facetious about elements of the sameness in Mary Stewart's romantic suspense books. Nevertheless, I am a 100% believer that well-constructed beautifully written sameness can be one of the most comforting things about reading a beloved author.

If you liked this... I have now moved on to another Mary Stewart – Thornyhold – which I am enjoying, although it offers quite a change of pace to The Gabriel Hounds, and may be a tad witchy for my tastes. I think that my favourite Stewart (so far!) is The Ivy Tree (definitely one for fans of Josephine Tey's Brat Farrar), with My Brother Michael battling it out for the next spot with the exciting Avignon-set (but unpleasantly domestically-violent) Madam Will You Talk. I have also commented briefly on Airs above the Ground, Wildfire at Midnight, and Touch Not the Cat (cousins again!). Curiously I have not reviewed any of my favourites.

I hope everyone is enjoying Mary Stewart Reading Week,
and thanks again to Anbolyn for hosting! 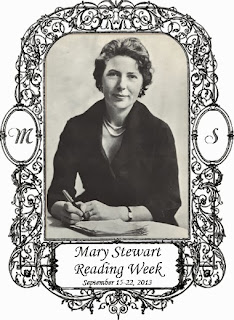 Next week is Mary Stewart Reading Week, the brainchild of Anbolyn at Gudrun's Tights.

I've just finished reading The Gabriel Hounds (1967), and thoroughly recommend it for all the lovely things one expects from a Stewart book: location, mystery, romance, danger, and gorgeous writing. I'll hopefully get my review out next week, but I couldn't resist posting this taster, featuring a bookshelf. To give some context, our heroine is spending the night in a ruined palace in Lebanon as she waits to see an eccentric and aged relative who has adopted Lady Hester Stanhope's lifestyle. The servant has come in to collect her dinner things:

Irritated now, and wishing she would finish her job and go, I concentrated on selecting a book. As light reading for whiling away an hour or two they were hardly promising. An Arabic grammar, a few books on Syria and the Lebanon which I had already read during my convalescence in Charles's room, and a collection which might be said to represent John Lethman's homework – some volumes (also familiar to me) about the original Lady of the Lebanon: Joan Haslip and Roundell and Silk Buckingham and the three old volumes of Dr Meryon’s diary about his redoubtable patroness. I looked at the fly-leaves. As I thought, they were Great-Aunt Harriet's own copies, presumably lent to her latter-day 'Dr Meryon' for his close study … I skipped along the row. T. E. Lawrence's Crusader Castles, Guillaume's Islam, the Everyman Koran, King-lake's Eothen … all Aunt Harriet's. No medical textbooks, which were presumably too bulky to carry on field work. The only things which carried his own name were – interestingly enough – Huxley's The Mind Changers, Fraser's Golden Bough, and a newish paper-bound copy of Théophile Gautier's Le Club des Hachachiens. No novels except Dostoevsky's The Brothers Karamazov and Margery Allingham's The Tiger in the Smoke. The last volume in the row was de Quincey....
It would be nice to be able to record that I was the kind of person who would pick up the Dostoevsky or the Huxley or even The Golden Bough and curl up with it for a glorious evening's read. But when eventually Mr Lethman came for me as he had promised, he found me a few chapters into The Tiger in the Smoke, and half-wishing I had chosen something less exciting for a night in the deserted wing of a ruined palace. 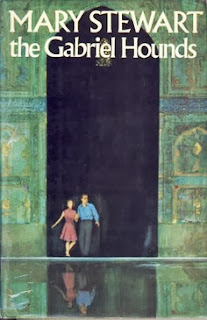 I haven't done a weekend words for ages, but I've just read this passage about a gorgeous library in John Dickson Carr's He Who Whispers (1946):

And in a long room at the rear of the house – a room after his own heart – stood Miles Hammond, holding a lamp above his head.


But he knew in his heart that it wasn't all right.


The flame of the little lamp, in its tiny cylindrical glass shade, partly drew the shadows from a mummified world of books. It was wrong, of course, to call this place a library. It was a stack-room, a repository, an immensely long dust-heap for the two or three thousand volumes accumulated like dust by his late uncle. Books old and broken, books newish and shiny, books in quarto and octavo and folio, books in fine bindings and books withered black: breathing their exhilarating mustiness, a treasure-house hardly yet touched.


Their shelves reached to the ceiling, built even round the door to the dining-room and enclosing the row of little-paned windows that faced east. Books piled the floor in ranks, mounds, and top-heavy towers of unequal height, a maze of which the lanes between were so narrow that you could hardly move without knocking books over in a fluttering puff of dust.


Standing in the middle of this, Miles held the lamp high and slowly looked round him. 'It’s all right!' he fiercely said aloud.


And the door opened, and Fay Seton came in.

I do feel a little sorry for the mysterious Miss Seton, who will be doing the dusting in here!